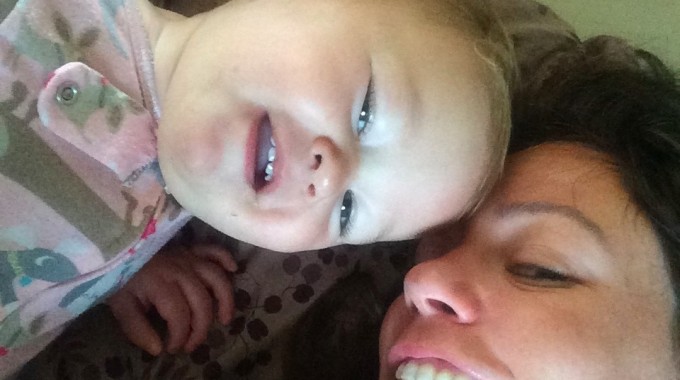 It has been a long road; paved with lack of sleep, double meals and a lack of possession over my own body. Since August 2012 I have been attached to Iza physically in one way or another – in the womb or on my breast. After leaving NYC, we really felt it was important to continue allowing her to nurse. It was really comforting in all the upheaval of moving, but it took a turn towards the worse over the last two months and she abused it. We called it “chain nursing” or “toggling” because as she would finish with one (I had very little milk), she would start up with another one. She would go as long as we would let her go back n’ forth before I would cut her off. Screams would ensue. In public it was embarrassing, and in private it made both of us so frustrated (and annoyed) that she was taking advantage of me.

So, we made the decision to wean. (I say “we” because I am lucky enough to have a very invested husband and father.) But when is the right time? We asked ourselves that a million times over the last 4 months and I am not sure we ever came to the right conclusion. Some women nurse until their kids are older (we hold no judgement, but maybe a little compassion) and some women don’t nurse at all (again, no judgement – it is fucking hard work). On our end, we nursed merely because we were told it was the best thing to do for the baby for general health, immune system and future, and we are stopping because we feel as though she has had what she needs now. We want to wrap it up and let Iza move onto being a big girl.

Truth-be-told, I am really not one of the kinds of mothers who relish in the love affair or romantic notions of a cuddled baby next to her breast (I am not a touchy feely person in general, especially not 24-7) and I kind of find it annoying. It is the single hardest thing I have ever had to learn and consistently do. I need a break, and be able to be alone for a change, I need to lose the extra 10lbs I have packed on from my double meals and be able to detox, work out again and be on my own schedule, void of my milk ‘coming in’ f0r Iza’s feeding time (and pumping sucks as an alternative). There you go: decision made.

Today we are at 48 hours without a latch. Watching your kid erupt because they are not getting what they need from you is horrible. 1 day in my period came back, and this morning I woke up and my ears are ringing from her piercing screams (girls can really give it to you, huh?), my stomach is bruised from her kicking and fighting me, and my breasts are full and on fire. But hell yeah, I am FREE.

Getting Back to Normal

Most women complain about a gazillion issues around their body, especially after birthing a child.…

Going Back to Basics

Time to Get Back to Basics
It’s been a lifetime… Well, actually, it’s been 3-years since I have really mustered the courage to change my pattern.

Kurt and I made a decision to go back to basics. It’s amazing how far off track we’ve gotten and it is time for a change. Kurt and I started Ra’Co in 2012 – can you believe it? It’s been nearly 7 years since we wrote our first post.