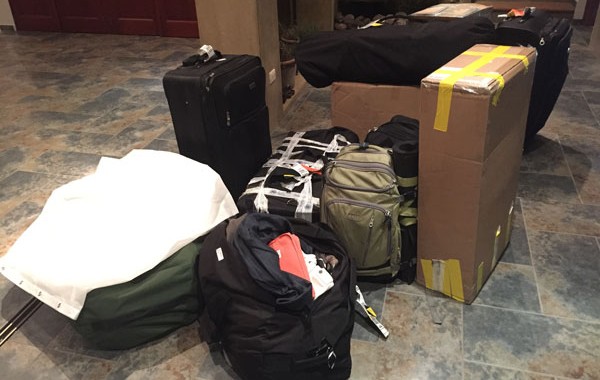 The answer is… Ten 70 pound checked bags of pain! Heavy lifting! But it’s precious cargo as we say around here, an effort well worth it. I guess we like our stuff more than we thought. Checked baggage over the airline limit is going to cost you, but for us it was worth it.

It was on my second mission to the US, this time to bring back (10x) 70 pound bags of things (to be sorted through over three days) we have been missing/needing (a thin line) that were packed away in a dark storage locker in the middle of Newburgh, NY. I have lived in a few armpits, and this is certainly one of them, and though we have never actually lived in Newburgh, our storage is there, for now. It’s close to Beacon and much cheaper than the city. And the storage place ain’t half bad.

So I took the red eye out of Guatemala city on August 11 and Arrived in LaGuardia at about 5:30 AM, got my rental car and set to it.

If you ever do decide to take on such a ridiculous task as this (moving by airplane), and I certainly hope you don’t, maybe fly Delta. At least they are the airline we are going with right now (but you know airlines, things may quickly change). As for now, Delta. When a company does us right, we give them big respect, because lets face it, there are way too many companies out there that suck.

Next, (hopefully you have abandoned the idea to move this way already) make sure to fly first class if you can. For one thing, from Central America, it isn’t that much more expensive. More importantly, the first two bags are free and you get a weight limit of 70 pounds rather than the paltry 50 you would get in coach. So for me that was about 100 extra pounds of crap I could haul along. A baby stroller, a Fender amp, shoes, cookware, clothing. Anything I could shove into a giant black military sized duffle bag or a badly bent $100 Target bag with a broken wheel and a missing handle.

But regardless of the problems inherent in a task like this, (stupidity), the cause fueled me on. Mama needs her shoes. Baby needs her stroller, papa needs his Strat and his iMac. (too bad I ended up with neither….Arbuella, help, I need my gear!). At the Storage Locker

So I holed up in the Ramada Inn in Newburgh (2 1/2 stars!) and spent 10-12 hours a day for the next three days sorting through our stuff at Uhaul Storage. I’m feeling orange just thinking about it. So here is what I was up against: Bin City. I ultimately got through it and in the end I would say I did a pretty good job getting everything that we needed. And with the help of arbuella Jan Ruby Crystal on the last day, I got everything packed up and loaded into the rented Chevy.

Things were pretty uneventful except when I was taking a screw out of the Bob Stroller and cut my finger with a crappy utility knife. Blood was flowing all over Bob, damn! I thought, mannnn, now I’m going to have to go to the emergency room again, for the second time in a month, pay a bunch of money and have a few stitches across my knuckle. How will I get the bags back? Ehhh, whateva, I wrapped it with some toilet paper and yellow duct tape and Arbuella and I finished packing. It was about 5pm by the time we finished, Arbuella starving and tired, my fingers duct taped, we’re all ragged and worn out. That day she had driven 3 hours from Mass leaving at 6am. Exhausted!

After dinner Jan headed home and I went back to the hotel to sleep as much as possible. Tomorrow could be rough…little did I know.

The Day of Checked Baggage Hell

So I spent the next morning in Beacon buying supplements for Rache, E3 Live was the big one, great for new baby Zai’s development they say. It did wonders for Iza, so hopefully it will be good for Zai. Blenderbabes.com has a good review here: E3live review. If we still lived in the States we would be taking E3live daily, no question.

Afterwards I was off to the airport, going down through the Hudson Valley on one of the most beautiful stretches of highway, the Taconic State Parkway. Incredible, put it on your bucket list.

Arriving at JFK Airport in Queens, I navigated through a daunting mass of travelers to get to the first available SkyCab agent. There were none. But  soon, from behind the counter, a guy called out to see if I needed help and took him to my ridiculously over stuffed SUV. We proceed to unpack and get busy with the checked baggage, but he told me we could only check 7 outside and we needed to go inside to check the others. First hurdle. So we checked the 7 and took the others inside. This is where first class came in handy. We went strait to the front in a separate check in area and started to check the bags. But soon it got ugly.

I had four boxes of gallon sized paint containers taped together to make two boxes that fit the size and weight requirement. They lady at the gate said this was a no no for TSA and the boxes had to be separated and treated as 4 boxes. That would be an extra $400. Hellll no! And the other problem was that I already checked baggage limit of 10 bags. I could check no more she said. Thats a serious amount of money in paint that I wasn’t about to leave behind. So the SkyCab guy, who was still hanging on said “Quick, follow me!” And we OJ’ed it through the airport flying over barricades, running through the backs of shops and jumping over people to get down two flights of stairs to the shops below. There I bought two of the largest dufflebags they had and we hightailed it back up to check in. At this point, things were getting surreal; after getting back to check in I found that I had lost the receipts and my gate slip to get me on the plane. Big problem. A couple of seconds later, when I was on the ground looking for them, a guy comes up to me holding my lost papers and hands them to me. And guess who it was? Philip Seymour Hoffman. But he’s dead you say!? No, it was him! I sat there with my chin on the floor and papers in hand as he walked away. I was in a daze. At the same time, I looked next to me and saw these tags laying on the ground (I saved them) : and  after that, I looked up and I see this: Meanwhile my friend is shoving two boxes into one of the duffle bags: Success! My luck is turning. But when we go to put the other boxes in the next bag, the bag is busted! No zipper. My friend says in an African accent “Man, this is really not your day.” Yea. But we shove the boxes in anyway and he proceeds to put a massive amount of tape around the broken bag. Pathetic! Finally the checked baggage is clear, all in. It’s a miracle. Now I just have to get the rental car back and return to the gate before the flight takes off. I only have a half an hour at this point.

So I got the car back and ran back to the gate with two massive carry on bags, get through customs, (minus some vice grips, a box cutter and an adjustable wrench that they took; I had forgotten about them) and made it to the gate just as the plane was boarding.

I boarded the plane, sat down, asked for a bloody mary, and it was smooth sailing after that. First class was empty. All mine! I put on my headphones, kicked back and disappeared into a deep sleep. Wind Flowing Through My Veins

On the Chicken Bus to San Lucas

The buses resemble a semi-truck with spiked wheels and Harley Davidson branding. They are a step up from Chicken Busses, but still have similar purposes.

Old Town Antigua is a Blend

There is something to be said for being in a new place which is both invigorating and terrifying. Antigua is full of vibrancy from many cultures.