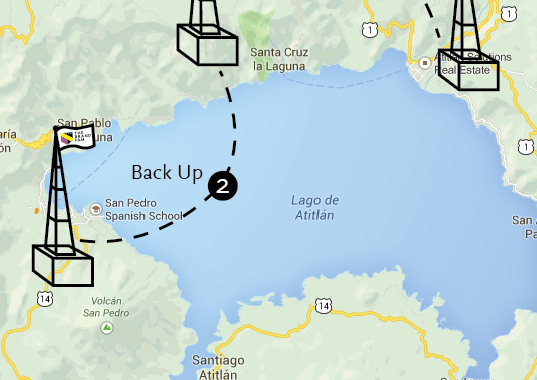 Let’s just say that the lack of internet in my life has provided me with one of the largest life lessons; “stress doesn’t make it any easier.” Exercising patience is my new motto.

For the last 2.5 months I have not been able to really work. As the primary bread winner for my family, and living in a foreign country with limited opportunity to network, relying solely on my existing contracts and relationships, I require internet for my survival. We require internet for our survival.

1 month of that time was at Casa de Joyce in San Marcos and it was a frustrating mess of dropped and inconsistent service. We had upgraded the service to the highest package available,  but it was rendered useless over the last month (other than a few sporadic uploads and downloads here and there) during the rainy season. This was expected, but also wildly frustrating. (I should note that we are lucky TIGO 3G works regularly and were doing a lot of work from our phones by using it as a wifi hotspot).

Then we moved to Patziac. For a monster set up fee and a monster monthly fee, we were under the impression that we would actually be able to get some level of service. How wrong we were.

So, about a month ago – about 15 days after being patient – I started reaching out to Mayanet, who is our service provider and documenting every time the internet went out. We had about 3 days one week without internet, 1 of those days due to power outages at our house. The last 2-weeks have been an in and out series of “power outages” in San Pedro (I quote it because we look out the window and there are lights, but apparently our internet has its own power?), and a series of other excuses why we don’t have internet:

Below is an overview of where we are to date. We have spent everything on the left and are committed to the Monthly Payments. Do we move forward with the new Pana Plan? Do I follow through with the My Plan? For a reference, here is what we are paying in monthly rental costs, improvements, etc. so it seems absolutely insane to virtually 3x that cost by adding in a permanent internet structure. But, it is one idea, and may end up being our only one to get consistent service. The below portrait is a visual of  what our gorgeous house is going to end up having added to it, in order to support our internet need that Carlos has outlined through the Pana Plan. It is terrifying and locks us into this property. But it is a very intriguing and interesting visual. While I am not an expert, for shits and giggles, I decided to take matters into my own hands. I called TIGO and had a fantastic conversation in English with a sales rep there. We discussed some opportunities and it might be a potential to work out a situation with the TIGO company.

Funny story though: We don’t have an address here, so when the rep asked me what it was, I had to explain that we are our own little space, no street address, no street, etc, we have a walking path and water! So, he asked me for my coordinates. If you are planning on coming for a visit, you can now search by coordinate:

*I complained so much and Mayanet called the internet provider so much that the company Claro (yuck) actually ended up looking into the problem. It was effecting tons of people. What?! No one seemed to have a complaint except me? Crazy! I guess people just expect intermittent internet service in emerging countries.

Man, I got myself in some deep doo doo back in February of 2013, so much so that it has taken me 2 years to write about it. Everything went into slow motion as I watched the stream of water move straight toward Rache’s Macbook Air….and splash, all over the computer it went. Here is how I fixed it…

I've been working on the Emptiness series all week and getting nowhere. A large canvas…

I am a PROCRASTINATOR. I try to get around it by playing little tricks on…