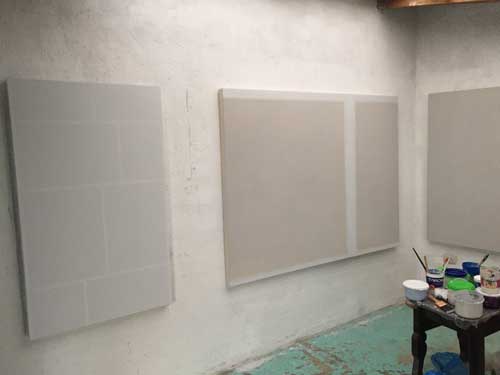 I’ve been working on the Emptiness series all week and getting nowhere. A large canvas has been tormenting me for several months and I have allowed it to do so, and that is why it is failing. The important thing is not that it is not coming out the way I want it to, but that my mind is not clear when it doesn’t look right and I have to start all over again. I get pissed, stressed and bring those feelings home and into others’ lives. My family shouldn’t have to deal with this. And with this one large canvas I am striving for perfection; a big mistake. Nothing is ever perfect. The 3rd Patriarch says:

One thing, all things
move among and intermingle,
without distinction.
To live in this realization
is to be without anxiety about non-perfection.

I am on the fourth attempt now and that is all I will try with this one. If it fails again I will have to live with it. Often, jazz musicians in the past only recorded three takes on a composition. After that the performance went stale because the spontaneity and freshness were gone. Maybe I should listen to them.

A big part of this series is the practice of mindfulness while I am painting. While doing the work I try to focus on my breath, the sound of the brush hitting the canvas, the waves from the lake below crashing against the rocks, the wind blowing against my back. The moment. This is where it is really at. My practice. It IS meditation and the nature of this series allows me to stay in the moment while I am working. I have to stay present because any little slip up will ruin the painting.

One piece I was working on in tandem with the large canvas was successful after the second attempt and I am happy with the results of that piece. I can see where my mind was while making that piece. But I don’t get all excited. I look at it as part of the bigger picture. Practicing mindfulness is an important thing so I can better understand the nature of reality and my true being. Doing a great painting or a bad painting are secondary. Clarity and realization are what I hope to achieve with my art. And this is what Ra’Co life is all about. The middle way. This one I actually messed up. The next one I kept.

As the larger canvas dries,  I am now looking at things from the proper perspective. The big picture, the practice of mindfulness.  Stay clear while working, learn from and accept the mistakes, and let the pieces live, warts and all. They are there as a reminder. The failed third attempt in progress.

These words remind of a time when I was playing in a band called the Meta-G’s in Cleveland, Ohio. We were ill, real ill. The funkiest and the heaviest band with massive potential. 3 rappers, guitar, bass and the funkiest drummer around. 3 black dudes, 2 Jewish cats and me, the weird white guy. We were the future. But nothing ever really came of the band because everybody wanted to be rock stars without making the necessary sacrifices. Too much ego, too many distractions too much of everything. Anyway, we had a big gig lined up at The Hard Rock Cafe in Boston which was about a 12-14 hour drive from Cleveland. We practiced and prepared for that gig for a long time. When it came time to leave for Boston we were all crazy with excitement about what exposure we might get from a goof performance. We were going to blow up.

We got to Boston, partied the night before, and slept long into the next day resting up for the gig. Everybody met at the club that night and we went backstage to warm up. After the first band finished we were all tuned up and ready to go. Or so we thought. The place was packed and people were amped and we took our place behind the curtain to await our introduction. Smoke was filing the stage, lights flashing, people screaming. Just then, right before the guy called out name, I noticed that my guitar was drastically out of tune. Turns out I had tuned up in silence with a chromatic tuner that was set wrong and I was tuned totally wrong. I did my best to get back in tune in about 3 seconds before the curtain went up but it was too late, the gig was shot. We finished the set but most of the people had started to filter out. We all walked out of the club, heads hung low…I had blown it for everyone.

Later that night we watched the video from the gig and it was torture. I tried to get up and walk away but somebody yelled at me, “Sit down, these are game tapes and you have to watch them”. They were right. I had to let it sink in so nothing like this would ever happen again.

The Meta-G’s broke up a few months later, but the truth is it had nothing to do with that gig. We needed a lot more work before we were ready and we needed to play a lot more of those gigs before the big one hit. And I have nightmares about that gig to this day. Well, maybe not anymore. I learned a lot from it and now I am applying it to what I am doing with my paintings. I need to do a lot more of them before I am really happy with the results. A few bad paintings are not going to ruin the whole series, they will make it stronger. I plan on creating 50 paintings for the Emptiness series and then moving on. I’m only on my fifth one. Time to get back to work.

So how do we practice mindfulness? Check out this post from mindful.org to get you started. The practice should be carried out in every aspect of your life. Working, cooking, brushing your teeth, walking the dog…all are opportunities for realization. Just try. With time and practice a mysterious feeling will creep in. You may start to feel lighter, more ebullient, your problems will seem less important, and you will feel a sense of gratitude for your life. The calmness and clarity that comes from serious mindfulness practice is worth the effort. Give it a try.

I don't know what this guy is but he looks a bit like a Teletubby,…

Why the heck are we in Guatemala?

My adventurer friend Meg just sent me a beautiful email and in it she said, "I…

Lots of things happening in the studio this week. New ideas to paint over huipil,…