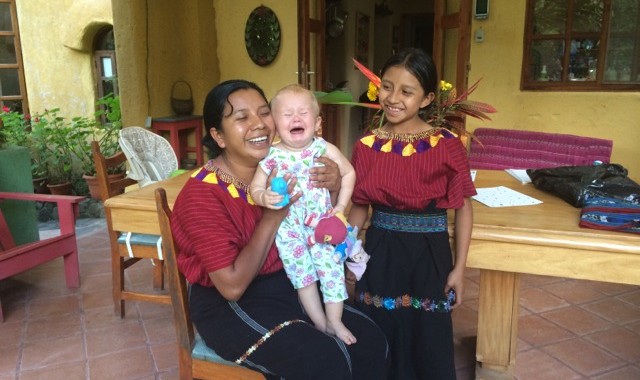 I mean, come on. We are apparently all the same around the world and it is just full on pathetic that we can’t all get along and work together as a global community. Right?!

So when we started this journey we relied on Mario (our devoted gardener) to set us up and get our life in order as our landlord Ana had recommended. For Q.80 a day ($10) we had a full time nanny who cleans our house! Kind of insane considering that is above their typical working wage and is considered a very good salary.

We loved the initial two ladies he set up to come. Mario called them ‘Chica’s’ so we did too! The first was Clara. We thought this was his wife, but it turns out to be his wife’s cousin. She has a little girl named Maria who is 9. Marta came on day 3 and she was warm, smiley and very in control. It felt like she understood us and we saw eye to eye and she has a little girl with Mario named Adriana who is 3. On Week 2, day 1 we had a new nanny come and her name was Cecilia. She was Marta’s sister and looked so similar we actually didn’t know it wasn’t Marta until 2 hours in. This continued for another week: Cecilia on Mondays, Clara on Tuesdays, Marta on Wednesday, Clara on Thursdays and Marta on Friday. On week 3 we were graced on Monday with a new lady, this time Marta & Cecilia’s mom. At that point I totally broke down on Mario and said, “We can take 2, but not any more. This is outrageous.” He fixed it and we were back to just Marta and Clara.

But then we decided to move. Clara’s husband Jose works at this Casa and when she found out we wanted to leave she told us that she had a place for us to look at. We didn’t really understand what she said until we ended up at this new Casa and we were being introduced to her husband and her sweet daughter Maria again. It was so strangely warm and kind of weird at the same time. So, we signed up and moved in. We talked to Marta and it was still our understanding that we would have Clara everyday except Wednesday and that Marta would be here then.

Yesterday morning Clara said to us that Marta didn’t know if she could come on Wednesday and would we be okay if she (Clara) came instead. Being silly foreigners we really didn’t think too much into it and didn’t even really consider that the sweet-natured Mayan woman would be able to manipulate the situation so well. Then around 11am we get this text from Marta:

Loosely translated it basically says, she is very angry at Clara and that she will not be coming but she wishes us all the best and that she loves Iza.

We kind of freaked out, but really didn’t know what to do. We absolutely love Marta and adore Mario. Adriana is 3, so Iza really relates to her and has so much fun when they play. Mario even said that Adriana goes to sleep every night saying, “Iza, Iza, Iza.” We feel in some ways like they are very cool and similar to us. We would definitely like to be friends with them. So, we invited Mario and Marta over for dinner tonight so we can get the scoop, but for now we are playing nice with Clara.

It is just too freakin’ funny. Nanny Wars… Mayan Style.

Transitioning Away from Work and Into Parenthood

Story of Us: Connecting for the First Time

Connecting for the first time for us was quite a while ride. On the agenda:…