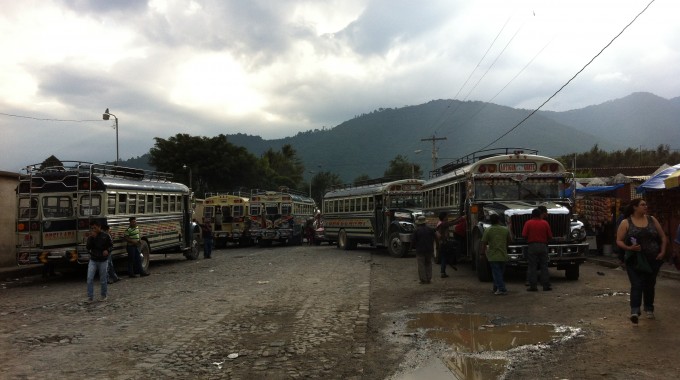 The buses resemble a semi-truck with spiked wheels and Harley Davidson branding. They are a step up from Chicken Busses, but still have similar purposes. This morning we set out for an adventure seeking a TIGO stick (wifi card) which we have been told are out of stock in the whole country of Guatemala. The place we were headed was Centre Commercial Las Puertos which is in San Lucas (on the way to Guatemala).

So, here we are on the bus, ready to leave on the adventure and the bus is full (or so we thought), with each seat taken by two. Then we leave the “station” and head out through Antigua and we stop 4 more times before we exit through the village. Now we were definitely full (or so we thought), with 3 people to every seat. As we start out heading towards Guatemala City we stopped another 10 or so times with people trading in and out of the bus. At the max capacity there were people sitting on each others laps and people standing in the nonexistent aisles. Sometimes the bus hardly stopped when it picked up someone… it kind of slowed and then all of a sudden there was someone new on the bus.

This wouldn’t have been so bad, but with a baby it totally sucked. Iza was having a meltdown and trying to nurse the entire time which made it so much worse. My nipples are in shambles. But when she looked up, she was having a full on fiesta by herself. The music matched her spirit with a Mexican band on the radio blaring the entire time. Kurt even noted that at the beginning of the drive the music got turned up.

This was not just a simple drive! It was a winding and elevation changing ride with lots of twists and turns leading to the entire bus shifting and all of us with it from one side to the next. Hysterically awful – so awful it actually was funny.

We figured out we missed our exit when we ended up in Guatemala City traffic. A full hour instead of the estimated 25 minutes we were told. We get to another mall Milefloris and jumped off… a little nervous to do so, but definitely knew we couldn’t wait to get to the center of Guatemala City before jumping off. This mall was certainly sorted and it looked like King of Prussia. By this point Kurt and I were hungry, thirsty and bitchy. Iza was flailing her arms so you can imagine she was definitely not a happy camper. We walked around for a minute a Kurt said, “Let’s go.” I insisted we stay and we ended up finding a TIGO shop and then a few kiosks. Everyone said we were ‘Shit out of Luck’ regarding the stick.

We hit a taxi defeated (only after a lovely juice break at Saul – a UK clothier in Guatemala), but wanting to still get to San Lucas to carry out the remaining components of the journey. We went to the taxi stand at this very high-end mall and for Q.130 ($15) we got to the next mall. So much for our saving money. The bus to the mall was Q.20 for both of us! (like $1.50). Ha.

We get to the Mall in San Lucas and head into the shop. We wait forever and ended up seeing the lady and she says they don’t have any either. That the whole country is out. Awesome. I am starving by this point and had really lost interest in the whole experience. We went to the grocer around the corner and got avos and chips. As we walk out the door we both looked at each other and said, “How do we get back?” There was not a single taxi in sight and we were on a massive road. A little scary. Two drivers honked at us and just past an antique shop this guy was kind enough to show us the right direction to the waiting area (only 200 yards away so we were excited). We got to the place and a bus arrived. We hoped on.

The bus was already packed and so while I was offered a seat, I chose to stand and hold Iza. Truthfully the idea of not having something to hold onto again and trying to accomplish sitting in the least conducive environment to doing so, did not feel appealing. So, I stood. We got back in expert fashion in under 15 minutes and we were happily ready to retire from our Chicken Bus journey.

All we got in 4 hours of our journey were avocados and chips. Hardly worth the adventure, but the experience is of course priceless.

Where in the World is the Brand Fam to Go?

When you have an unlimited number of options, wish for great experiences and don’t have anything to tie you down, it is overwhelming; and this has become the big issue for us. We are stranded in fluidity and we simply can’t decide where to be. At some point shouldn’t we just forfeit choice and just pick?

While its undeniable great exercise, I find paddleboarding to be weird. For someone who is ungraceful, it seems like a disaster waiting to happen…. But I am fascinated with the concept since it is a “newish sport” in the states.

Saturday is family day, always. Today we decided to jump in the launcha and head…