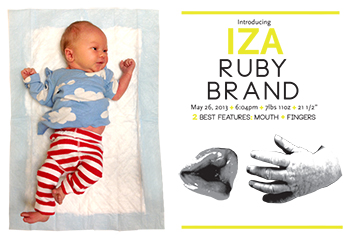 We have really gone to the ends of earth to make sure that we were prepared for Iza’s arrival… although, it might be impossible to plan, preparing is an important step to any successful experience. I still got Bell’s Palsy at my 7th month mark, an indication of the stress that my body was ensuing as a result of carrying a child. In turn we challenged our own choices and worked hard to find a way in the last 3 months to rebalance my body and our birthing plan to accommodate.

Some of the external things we did to prepare:

Also, after going through the Bradley Method Classes we feel empowered to make our own choices and to not just allow the hospital / doctors to make decisions for us. We went on tours of 3 out of the 4 hospitals that we were associated with. First Putnum, (definitely never having our kid there with the cinder block walls and dark hallways and the Mid-Hudson Medical Group that we disliked immediately), then Vassar (with their politics and general issues surrounding healthful eating), next was Northern Westchester Hospital (which had a 40% cesarean rate) and finally Hudson Valley Hospital’s Birthing Center out of a recommendation from Beth Proague, a mommy and professional in Beacon. Our Doctor, Dr. Dinsmore, was local to Fishkill and was as weird and quirky as they come. But he came highly recommended and also did 2 days a week with a local clinic that I really respect.

I have to say that when I started pregnancy I knew absolutely nothing and I felt extremely prepared after going through all the above – the car was packed and ready, car seat is in and our birth plans were already at the hospital. We were checked in and our insurance already cleared, so really the classes were extremely helpful helpful to us in understanding, preparation and getting Kurt to feel part of the process. He was totally invested and knew how vital his role was to a healthy birth!

Everyone takes prenatal vitamins, but does anyone actually know what’s in them? Throughout your pregnancy there are different things that you need at different times and a blanked prenatal is just not enough to do the trick. There are also too many vitamins mixed into one tablet to make it effective, so it is best to do it without taking them all at once.

Immediately you need Folic Acid and a lot of it. I ate a ton of broccoli, but supplemented with 800mg of Folic Acid as well. Then I introduced Omega 3 around my 4th month for brain development. This I still take now when I am nursing. I also started taking E3 Live which helped to regulate my body and truly made me sleep. When I still had trouble sleeping I took magnesium in my tea and now I am doing a body spray which is helping Iza with regulating her immune system. Ate organic & juiced often, but allowed ourselves to indulge in cravings:

Many women use pregnancy as an excuse to allow themselves to fall apart and just indulge in whatever they want. Really, you should be upping your health ante and eating even more healthy. Kurt and I juiced as many days as we could during the week. At the end of pregnancy this was hard because of the little space I had available, I was burping up a disgusting flavor of leaves all day long after drinking, but otherwise we maintained. I allowed myself to eat as much and as often as I wanted to. This was hard because my body wanted to eat all the time and I am not a super eater. I typically eat 4-5 small meals a day and maybe 1 big one and in pregnancy as soon as I was done with 1 thing, I was onto another meal. My time was sucked up by eating all the time!

We had large salads most of the time and Kurt became an expert gluten free baker. We cut out sugar completely and focused on eating a ton of fruit instead. I got really into frozen peas as a snack and frozen coconut and fruit smoothies as the weather got warmer. And my cravings seemed to go in waves. For a few weeks I was obsessed with eating quinoa porridge with raisins and then I couldn’t even look at it, same with avocados. It was weird to walk into a bakery or restaurant and the baby jumped with the smells. I wasn’t used to being so sensitive to my choices, but I truly turned a corner completely and focused on what Iza needed to be healthy and grow strong.

Most who know me, know I don’t eat meat, poultry, gluten, soy or dairy of any kind, so it was certainly an experience to craft my meals everyday. My favorite was Kurt’s raw bars and crackers which are 10x better than anything you can buy that’s store bought. I am a lucky girl with a chef like him!

Indulged in a fabulous maternity wardrobe:

I was still working at the beginning of my pregnancy on a contract in Massachusetts. As a result, I made sure that my clothes were always fitting me and that I had a great balance of work and play outfits. I did not want to be one of those women always in pj’s in the middle of the day or wearing sweatpants to meetings because nothing else fit! So, I indulged.

And made sure to continually do stuff together:

We were fortunate enough that I had off for most of the end of our pregnancy, so we were able to spend as much time as we wanted together. We took full advantage by walking and talking, planning our future and being creative together. Kurt especially was much more creative in his art during this time. I, on the other hand, became exceptionally organized and focused. It was a great blend to capitalize on opportunities to work together. One of the most special items that we did was go on our own baby moon – kind of a honeymoon before the baby comes. We went to America’s best restaurant called Blue Hill at Stone Barns which is in a nearby town called Pleasantville. It was not a cheap dinner, and to prove it, we relished in every moment of it. We had 8 courses and maybe 3-4 drinks a piece. Everything was all natural, organic and grown right there on the farm. Everything was made just for us, based on our preferences and allergies. It was sensational and totally worth every penny. Kurt even did a little speech and gave me a wonderful card, filled with the sweetest message I have ever received.

We also cooked together every day and took quiet walks whenever we could. The idea that our life was about to change and a 3rd person was going to be invited into it offered us reason enough to seek as much time as possible together – for the next 20+ years we are going to be active parents and never truly alone without thoughts or worry.

And in the end: Now, on the other side of all this, we are lucky. We have an insanely beautiful daughter who was brought naturally into this world and is the sweetest disposition. We were able to leave the next day from the hospital after giving birth and my milk came in within 4 days from date of delivery. We are managing to sleep through the night and our kid only squaks when she wants something, and rarely cries. We hold her whenever she wants us to and we listen to her needs because we know what to look for and the warning signs she is giving us. And in general, we are getting through… which is a lot for 1st time parents to be able to say!

The beginning stages of a brand are crucial. It has to be a perfect setting with the right groundwork. Without it, you are already sunk before you get off the dock, so we know how important the branding of our baby is and we have not been light with the development of it.

When we found out that we were having a baby, we would talk about baby names on our decent from Mt. Beacon… it is about 30 minutes down, so we had lots of time to talk. Kurt loved the name Zai and within minutes we were both sold on it so we decided that if we had a boy it would be Zai Stefan (after his brother’s middle name). Coming up with a little girls name made us crazy. Rache had a million ideas and all of which were shot down with force, not being the right sound, arrangement of letters or potential nickname. Eventually, out of frustration, Rache tried rearranging the letters for Zai and it spelled Iza.

We selected Iza [pronounced EE-sah] because it is a tribute to beauty, being the first part of Izabela, a Hebrew version of the Americanized name Isabella. It also means in Hebrew “My God is Vow.”

There are many other significant sources of Iza in the Muslim religion, and we have also found origins of the name from the South African Zulu origin from the  Zulu or Xhosa word meaning to “come.”

When we first shared the name with Rache’s grandmother she was certain that we had dropped the ‘L’ from the first part of the name, making it “Lisa.” So, when we shared that it was Iza in spelling, she was totally confused. Her Rabbi recently shared with her the Hebrew meaning of “Rising Up” and recognizing Iza will be raised culturally Jewish with the Zen Buddhist philosophy (she is going to be a JewBu), we find her name having a Hebrew origin is very fitting.

We are happy to stay that it stuck. Ruby is Rache’s family name and with a bunch of nutty ladies in the family, Ruby seemed to be a fitting name since she is sure to be textbook “nutso” with our combined genes!

There you have it: Iza Ruby Brand.

I have realized that when you grow up somewhere you can’t let go of where you came from. It is the rhythm of the seasons and the smells that bring you nostalgia and a sense of home. I have the same issue from an opposite cause. I miss snow so much that I think it is giving me my own version of Seasonal Affective Disorder (SAD)!

Throwback: Our First Supper – I Paid Him to Make It