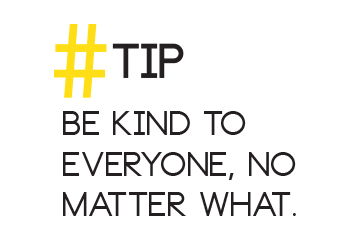 Our mother’s always told us to treat others as we want to be treated, but now as a parent myself I would like to establish this as “Be Kind to Everyone, No Matter What.” There really are no reasons or excuses why kindness shouldn’t be how you want to be treated, and in life I believe things have been left too esoteric and not direct enough.

The term ‘Kind’ stems from the Germanic root of kin meaning natural or native to. In someways I believe Kind to be a form of truth and wholeness growing from within something. It is also a physical act of doing something for someone else and can be split between being a noun and a verb depending on how it is put into action.

I have had a lot of kindness bestowed upon me in life. First my parents who offered me every opportunity, then wonderful teachers who shared their incredible journey’s with me and finally staff who have doted and cared for me throughout the years. I see life as a journey through acts of Kind, and like others gifts to me of kindness, I always return the favor. My heart is fuller because of it. One story comes to mind which I wanted to share:
In 2010 as I was ending my marriage to my 1st husband, I had to find a new place to live in London. I looked absolutely everywhere to find a good roommate situation in a non-shit hole. It was honestly a challenge for my price range I could afford. I looked first in some of the hip and trendy sections of town which seemed more affordable, but I came up short. At 28 it seemed I was a bit washed up and out of my league in terms of ‘hipness.’

I found Luca through a roommate site and sent her an email of my situation. After yoga one Saturday we met at the apartment. I was seriously like a scared little girl and I remember at the time I had horrendous acne from stress and allergies. I really couldn’t be in a worst spot emotionally. Luca interviewed me as I had been interviewed 10x before in the other apartments I looked into. Towards the end of the conversation I felt comfortable and more at ease with her so I told her how much I wanted to find a good place to heal. I was broken from living away from home, having lost my partner and was beginning to transition away from a company I built more than a decade before.

She called me later that evening with the decision for me to be able to live with her. This to me was one of the greatest acts of Kind I had received and mostly because it was from her. Luca is a selfless, giving and wonderful friend. She offered me a chance to reset my life and helped to ground me once again. She was going through a similar situation with her long term boyfriend from Australia, so we were two hot single girls living together in a fabulous apartment in Camden Town, North London.

While we have not stayed too much in touch outside of the occasional Facebook message and email, Luca will always hold a special place in my heart due to her kindness.

Making mistakes is part of the journey of life. Honor your experience knowing that often your intentional path will be changed forever as a result.

Tip: Spend a Little More, Save a Little Time

Listen to the words from the song by Malvina Reynolds Magic Penny: It's just like…

It is most common to work first and reward second, but we recommend beginning with PLAY and ending with WORK leading to a more relaxed self.