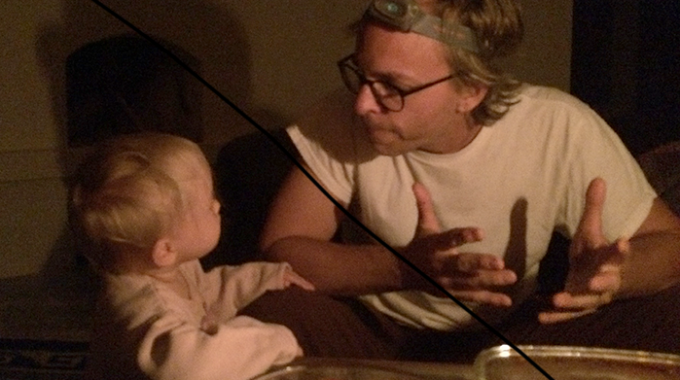 While this might be true for Iza, speech delays during toddler speech development in multilingual households is not the rule. Actually, studies show that it shouldn’t have an effect any development, and it could even help to set up Iza’s brain for better learning in the future.

It doesn’t worry us in the least bit either way, and actually we find it to be a wonderful time for all of us: a confused mess of strange syllables, baby-talk, Katchiquel, Spanish and English. Recently, Kurt decided to start adding in Sign Language to the mix of ‘languages,’ so we have our way of communicating with her… (which is a sure thing and we hope down the road she will have a deeper understanding of the unspoken word

, which is very important to us – Kurt’s Zen brother and his wife are both deaf and have raised their child Josiah with Sign Language

But whether or not she is having a delay in her sentence structure, directives and actual words, the fact of the matter is that Iza loves to talk. At 11-months we couldn’t get her to stop babbling and at 18-months, she has full conversations with herself, her nanny, my assistant and even the cat. She will happily talk to her toys or even the wall, if no one else is around. She could talk all day and all night long and still not say enough. There are even moments when I wish the delay was real and we would be able to have some silence back in our lives, but then of course I slap my own wrist and remind myself of how crazy that is to wish and how lucky we truly are.

And she knows EXACTLY what she is saying. In between her babbles, we find a few words that we know, and our staff seems to understand more of what she is saying since her primary language is Katchiquel. She is very assertive and sure of herself, almost preacher like. In the mornings she likes to go out on the porch, which looks out over the gardens in a similar setting to Simba in the Lion King

looking out over the ledge of the rock into his kingdom. She puts her hands up like a preacher and shares everything on her mind to the world below her. It is truly remarkable to watch our very dramatic daughter, taking front and center stage with her voice.

But what is she ACTUALLY saying? We have no idea. We had “Agua” down by 14-months pretty solid, but then she didn’t really say anything we understood until she was about 17-months. Now everyday she learns something new and is more than excited to share it with us. The staff said by around 16-months that she new about 5 words in Katchiquel.

We have been researching this and am curious to know more about how language effects people, beyond childhood. My grandmother learned Hebrew at 91 and she is as spritely as ever at 94. She is quick and has a memory like an elephant.

So far the best collection of research on this is written by Corey Heller who started the blog on Multilingualism.

…children aren’t exactly having to “learn” twice as many words, like I did in my high school French class.  They don’t have to think about which language bucket to put each word into.  Our bilingual children are picking up something more like packages of sounds that they are hearing around themselves.  They are simply putting the sounds together in the context that they hear them.  As their little brains become more complex, they start to understand concepts like words and sentences and parts of speech. Their main goal becomes making themselves understood and getting others to react to their needs and wants.

Corey also provides tons of research from Cornell and other publications focused on multilingualism. She has her own magazine which has great resources: Multilingual Living

Will My Bell’s Return?

Obsession with Ice During Pregnancy

Pregnancy does some weird things to a body, but ice obsession? Crunching ice is a ‘thing’: a result of an obsessive behavior, pica or iron deficiency.

Bacon Recipes for a Vegan Gone Baconite During Pregnancy

What happens when you fall off the vegan wagon? Well, you land in a pile…