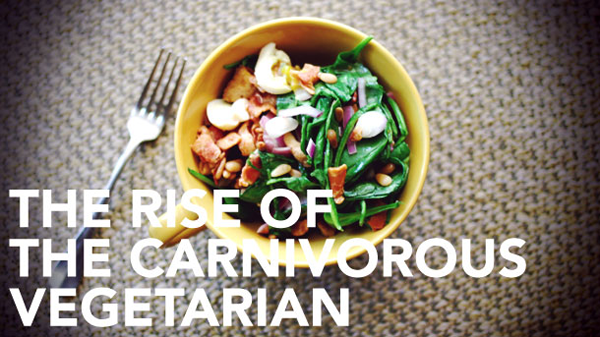 There has been lots of speculation in the media over changing your diet from meat-based to plant-based. Tons of research has gone into eating raw (salads, nuts, legumes… mostly uncooked foods in their purest form) or vegan/vegetarian can provide you with a healthier, happier base for life. And it is has been a proven concept.

But what if you still like meat? Well, there are tons of meat look-a-like products like fakin’ bacon strips and veggie chicken nuggets, etc. But there is also a new alternative series of diets like Flexitarianism, Meatless / Meat Free Mondays which are rising styles of eating and they make sense. Moderation, substitutes or control around the traditional 3 meals a day (with meat as the main).

Michael Pollan, guru o’ all things food, says in his Food Rules Book, “Eat food. Not too much, mostly plants.” Even Cojean in Paris has adopted this statement and printed it in English on their lunch sandwich bag. It is a rising movement. Other key figure heads are the Esselstyn Family has been working towards this alternative diet for decades with early cancer patients in the 80’s and most recently the Fire House as documented in Engine 2 Diet. And further, the McCartney Family’s personal pledge and campaign called Meat Free Monday (based on the US’ Meatless Monday) is getting more and more media attention and they are angling towards small, incremental changes.

Its finally getting popular… and with good reason. Even Oprah has hosted The Vegan Challenge on her show! Whether it works or not is still to be determined, but at the end of the day the key is balance.

It doesn’t all have to be meat substitutes or non-delicious-looking foods. Moderation is important and especially portion control. Try making meat a side item instead of the main, or use meat flavoring or juices to flavor your veggies (if you are really craving meat). Use fish in moderation or dairy products to make the meal more interesting or spice it up with a smattering of flavours from herbs. The concept of Flexitarinism or one of the Monday campaigns is to eat what you want in moderation, but balance out with a more plant-based diet.

White House Chef Sam Kass and First Lady Michelle Obama work together with kids in DC on her Let’s Move to Schools Campaign. Their efforts and menu opportunities have not gone unnoticed and they are making tremendous change in reeducating the student population around the country on how to eat and it is mostly plants that they are promoting. Her shift to the MyPlate graphics earlier this year are just the first step.

Lots of menu development and time is going into Flexitarian Diets. Check out some of the popular cookbooks below!

RESTAURANTS IN THIS VEIN

We imagine there to be a great opporutnity in food delivery for this rising movement. Eating at a facility that has both raw / vegan offerings along with a full meat-based offering could be the solution. If you want to inquire on our project TILTKITCHEN, we would love to tell you more about how this can be implemented successfully in the same space…

There are a lot of key players right now. PETA is promoting, Celebrities, Schools, Parents, Food Companies, Restauranteurs, Authors, etc. Activists all around the world are coming out of the woodwork and telling their story, lightening the mood and getting the party started on change. Last year Planeat launched in the UK market as another Food, Inc. style documentary about living on a plants-based diet. Food Day is going to be marked this year as October 24th, so get out and support! Who knows what will happen next?

One of our all time summer favorites, we love embracing the local produce and offering…

My Journey Through a Food-Filled Life

Food. It is the love of my life and the bane of my existence in…