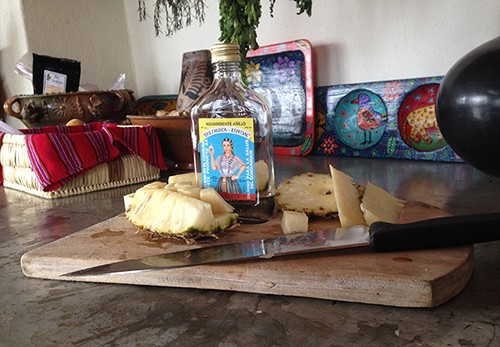 Even though we are surrounded by the immense beauty of the lake and it’s surrounding cliffs, hills and volcanoes, Rache, Iza and I are going through some stressful times. Rache is weaning Iza from breastfeeding and Iza is really not liking it at all. That has been the one true thing Iza has been able to identify with her whole life and now it is being taken away from her. We get it. She doesn’t. We are also trying to secure a long term living situation here and a short term situation in New York during the busiest seasons for both areas. Not fun. Not to mention that Rache is coming off one of the most intense work periods in her life and I am trying to make my art happen and develop my online businesses with the pressure of knowing that I have to make these things happen so I can one day fully support the family and Rache can take on duties of Full Time Mom. To offer a short respite from the anxiety, over the weekend I developed a very special Guate-centric frozen cocktail called Devil’s Paradise. It tastes amazing, is incredibly refreshing but has that special kick we all long for during stressful times. Here it is! Devil’s Paradise The base for this drink is Aguardiente, a spirit that pretty much has a counterpart in all areas of the world. A universal chicken soup if you will. Basically it’s straight moonshine, designed to knock your ass out in as short a time as possible. Here a liter costs Q55, or about $7. Ouch, you know we are getting into some trouble. Even a local friend, our driver/roof builder (?), and awesome dude Giovanni, who grew up here, cringed when I told him what I was drinking. But I found out that it really isn’t that bad and I didn’t get a hangover. Of course, if I had my druthers I would use some really nice rum like Ron Zacapa Centenario 23, but hey, we saved ourselves about $75! Of course mixing that quality of rum would also be a damn shame. So Aguardiente it is! Aguardiente literally translates as “fiery water” and is distilled using any number of things, but usually fruit or sugar. In each country it may have different names, strengths and can be made from different sources. Here in Guatemala I have no idea about any of the above, but it tastes like it is made from sugars and is about 70 proof, more or less. The other ingredients are: 1/4-1/2 of a fresh pineapple 2 papaya and shredded coconut ice cubes a half cup coconut milk a sprig of mint for garnish for the Aguardiente, use 2-4 ounces, depending on your stress levels. This cocktail is also extremely delicious without the alcohol and the kids will love it. Just make sure you separate the hard stuff from the virgin stuff. Rache almost gave a big slug of the hard stuff to Iza. Those two often move too fast for me, but this time I caught them! So here we go! First of All, How to Cut a Pineapple: cut the ends off cut in half and cut out the core slice down the middle, then slice in the opposite direction to create blocks slice underneath to remove chunks add the pineapple to the blender drop in the cubes add delicious organic coconut milk, start with 1/4 cup – you can use fresh coconut milk for an even better drink blend it all together, garnish with a slice of pineapple and a sprig of mint, voila! there you have it, The Devil’s Paradise made with Aguardiente, a guaranteed quick fix stress buster

You can't get good home made GF cookies in Guatemala. Well, good is a relative…